The University of Minnesota renewed its partnership agreement with the University of Iceland on September 15, 2022, celebrating 40 years of successful student exchange and collaboration.

Since the partnership was established in 1982, more than 80 students from the two institutions have spent a semester or year living and learning in the other country, supported by funding from the Val Björnson Icelandic Exchange Scholarship. Faculty have also been able to conduct research and collaborate with peers using the Carol Pazandak Iceland-Minnesota Travel Fund.

“Here we are in the 40th year of this successful relationship,” Meredith McQuaid, associate vice president and dean of international programs, told guests at the anniversary celebration. “It is quite an achievement. An achievement that is unique in the international history of the University of Minnesota and something of which to be uniquely proud.”

President Joan T.A. Gabel reflected on her trip to Iceland in 2020—her first international visit as president of the University of Minnesota. She said it was a significant moment for her personally, and that it inspired an entire section of the University’s systemwide strategic plan focused on the Sustainable Development Goals and societal impact.

“We find our best work is done collectively and collaboratively, and with partners like you that are willing to commit to long-term engagement,” she said at the celebration. “We're really proud that you're one of our strongest and most enduring partners. And the fact that we've been doing this for quite some time in no way limits what creativity will allow us to inspire into the future.”

He also discussed the institutions’ collaborations in the fields of nursing, health sciences, and education and expressed hope that more opportunities would follow.

“During this visit, our delegation has already had very interesting discussions with your faculty to explore other avenues of collaboration,” Benediktsson said.

Daniel Haataja spent the 1988-89 academic year in Iceland as a Val Björnson exchange student, which he credits with inspiring his interest in languages. He went on to earn his master’s degree and Ph.D. in linguistics, and has been teaching Finnish and phonology at the University of Minnesota since 2002.

“I had dreamed of going to Iceland ever since I was a young boy,” Haataja said. “I think I got the idea when I found a stash of National Geographic magazines at my uncle’s cabin, and there was an article on Iceland. Iceland seemed wild and untamed … with interesting and very fiercely independent people. I just had to go.”

Once he arrived in Iceland, Haataja made it his goal to learn to speak Icelandic. He enrolled in a first-year course, but his instructors quickly realized it was too easy for him and suggested he enroll in the second-year class. Haataja ended up taking both courses for the entire year. He also spent hours practicing with friends over coffee.

As his exchange program came to an end, Haataja decided to find a job in Iceland to work even more on his language skills. He ended up at the student registration office, where a coworker started telling him what he needed to do when students started coming in asking for transcripts or needing to register. Haataja told her he didn’t really speak Icelandic well enough.

“She said ‘Of course you do. You’ve been speaking Icelandic with us all day long here. You’ll be just fine,’” Haataja said. “I, of course, was terrified.”

But it got easier every day. One day, a fellow student in his dorm didn’t even realize he wasn’t from Iceland.

“That was the best compliment,” Haataja said.

“When we look at the list of both Val Björnson scholars and those Icelanders who have studied here, they have had a huge impact on Icelandic society and also global perspectives,” said Jónína Kárdal, president of the Iceland chapter of the University of Minnesota Alumni Association and a former Val Björnson scholar herself.

Some of those past students, including UMN alumnus and former prime minister Geir Haarde, appeared in a video discussing their experiences.

“The University has been very kind to me, not only in terms of the education, but they’ve also honored me in many ways,” Haarde said. “Back when I was prime minister, the president of the university was here with a delegation and honored me with an honorary doctorate, which I cherish very much.”

R. Hulda Proppé, a research manager at the University of Iceland, appreciated the academic training that helped further her career.

“This opportunity to do this exchange allowed me to broaden my vision and my expertise academically,” Proppé said. “The most important thing for me was the academic rigor and the focus that I learned to engage with and help me create my own vision of where I wanted to go.”

“I would just like to say to everybody who is involved in the University of Iceland-University of Minnesota relationship, keep going,” Haarde said. “You’re doing a great job.” 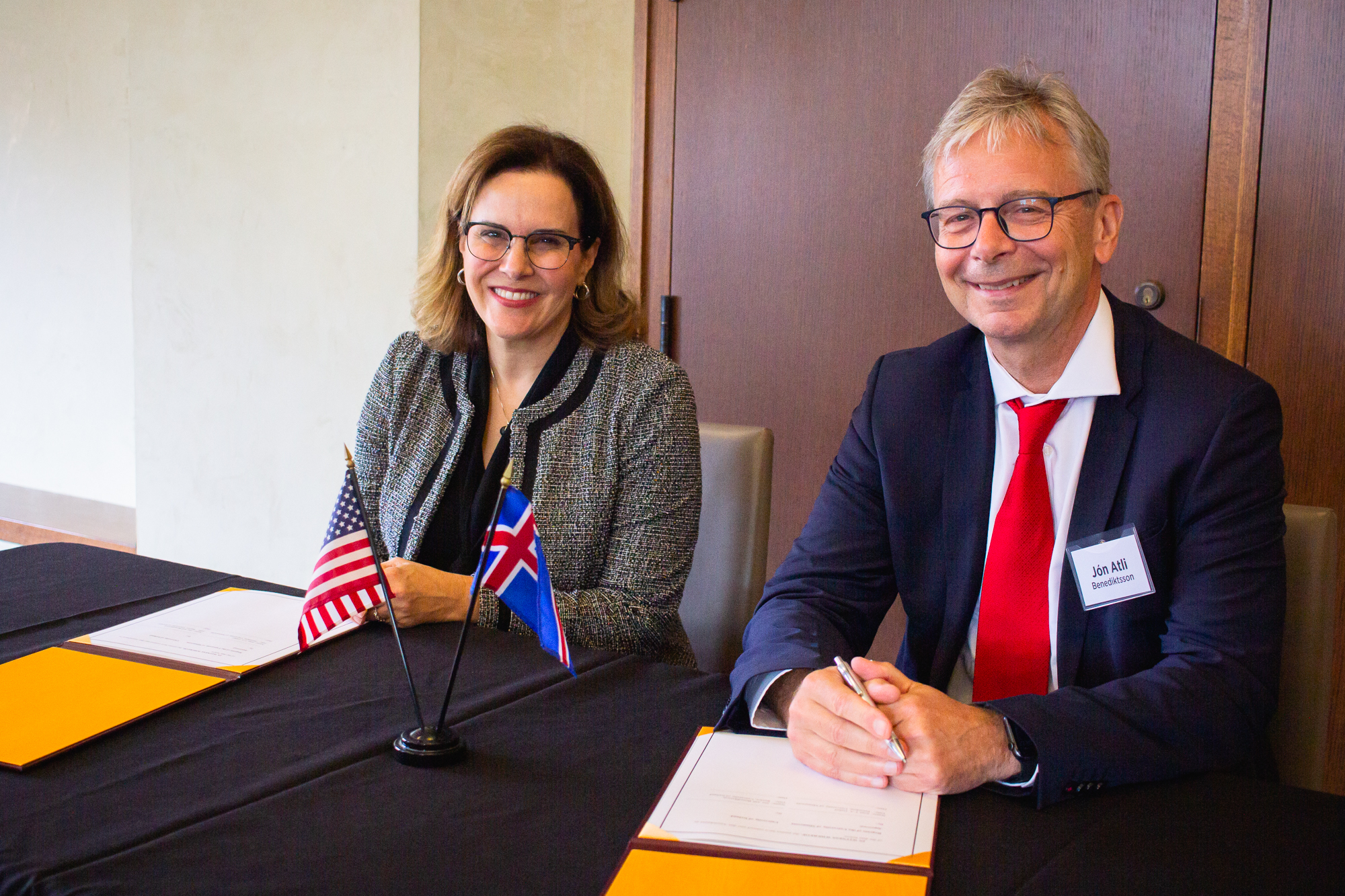